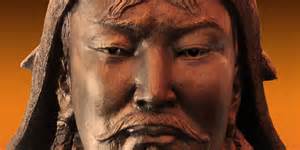 Used to be we’d talk ’til the yaks came home.  We don’t talk like that anymore.  Actually, we don’t talk at all.  You’re distant and quiet, even with the kids.  You’re never home at dinnertime and I can’t remember the last time we had a date night.

Other gals say it’s the same with them.  You and your horde come home after conquering and slaughtering and a year’s gone by and you act like some bigshot who’s gonna take over where you left off, but guess what? everybody’s been used to fending without you. Know what else? we’ve done pretty good, too.

Whoa, Gengy; don’t get your temper up!  You’re such a control freak, but you’re not gonna bully me anymore.  I love you, I do. But I can’t — no, I won’t — keep taking it.  You come off as so studly but I’m tired of sleeping by myself while you get wasted on that fermented crap.  I’m really sick of all those concubines hanging off you.  And I’m tired of entertaining all those brutes you call generals.  Gengy, I’m just. plain. tired.

Your moods don’t bother me anymore.  I don’t give an ox’s ass about all that blood on your hands and those nightmares you have.  Man up, Genghis!  It’s a brutal world out there for all of us; but the Great Khan wants us to feel sorry for him like nobody else matters.

The saying is “love conquers all”, not “Genghis Khan conquers all.”  Try thinking about somebody else besides yourself for a change!

It’s beyond me how you can get one end of your empire to communicate with the other but you’re in the dark when it comes to communicating with me.  What do I want?  I’ll tell you:  I want you to tell me dinner was good.  That I look nice.  Tell me about your day; you know, like how’d it go out on the steppes. Some funny story about one of your generals.  Like that.

Yeah, yeah, I know all about all the great stuff you do.  You keep telling me, don’t you?  You don’t listen, not to anybody.  You do what you want, you get what you want, and thousands of people get hurt.  If you put half as much effort into us as you do into work, we wouldn’t be so far apart.

Look, Gengy, we’ve been together a long time, since we were 12. Pretty good for an arranged marriage, huh?  Remember our first night — all those stars! the music of shuffling ponies.  And you couldn’t . . . well, that’s ancient history.  After all, you were only twelve.

You once said you’d give me the known world but I didn’t think it meant you’d be gone all the time.  It’s like you’re trying to prove something with all this conquering.  And being so fearsome; what’s that about?  Sometimes you even scare me.  You don’t have to be a therapist to see what having a tyrant for a father did to you. And the way you treat me? Just like your father treated your mother.  She took it for all those years, but I don’t have to.

I’m sorry; bringing your mother into it, that was a low blow.

Listen.  Mongolia doesn’t feel like home anymore.  You’re never around and when you are you’re all inside your head about who you and the boys are going to pillage next.  The kids don’t need me; they’re all grown and scattered to the winds.  You don’t need me, and I’m tired of doing this marriage by myself.  I’ve got to think about me for a change.  I’ve always wanted to travel —  maybe China; I hear their silks are to die for.

Don’t act surprised, Gengy.  We’ve both known this was coming. As brutal as you are, you never laid a hand on me.  This is gonna sound strange, but you know what?  I almost wish you had.  At least that way you would’ve touched me.

Kathe Skinner is a Marriage & Family Therapist specializing in couples work, especially with those couples whose relationship is impacted by visible or invisible disability.  She lives in Colorado with her husband David (whose latest conquered territory is the garage) and their two pampered yak-ity cats, Petey and Lucy.  She and David hold a Couples Communication Workshop throughout the year.  Check it out all the Workshops offered @ www.coupleswhotalk.com

This site uses Akismet to reduce spam. Learn how your comment data is processed.